Not so Zombie Claire, a new painting... 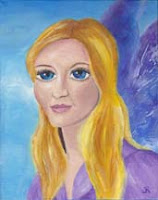 This 8x10 original acrylic angel painting is based on Claire, the editor in chief of the magazine ImagineFX. They hosted a competition based on the concept of turning her into a zombie. I'm more of a traditional artist than a digital artist and they're more of a digital magazine than a traditional one so my concept was to paint an angel portrait of Claire, then scan her in and turn her into a zombie with Photoshop. I couldn't bring myself to do it. So, a not so zombie Claire painting...

Anyway, there were perhaps seven photographs of Claire to choose from. I liked the two below the best, so I sketched them both and chose between them. Actually now I like the other one too, so possibly another Claire painting in the works in the future, or possibly not. Those two sketches were also sketch 2 and 3 on 8-13-10 of my sketch challenge. 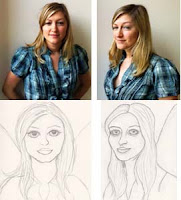 Below are the works in progress photos of the painting:

I meant to post this sooner but have been very distracted lately. I'm also woefully behind on my sketch challenge. I've done some, but not many. 365 in as many days is likely a goal that I'm going to miss, but I'll try to do some scanning in and post again hopefully Friday. However if this goes anything like when I said I'd post on Tuesday around a month ago, well it could be a while...
Posted by Lisabella Russo at 6:09 PM No comments:

Every year, I try to paint the Zodiac animal of the year for Chinese New Year...  February 12th will be the start of year of the ox.  Righ... 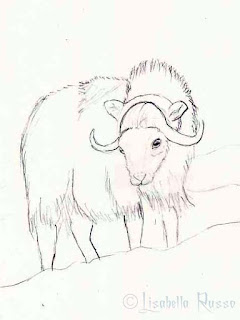